WHEN ALL THINGS EVAPORATE, WE’LL TALK ABOUT MINERALS

An Installation Performance by Simone Couto and JaeWook Lee

When All Things Evaporate We’ll Talk About Minerals is a one-night event focusing on the interaction between man, nature and culture, and the ways in which participants aspire the unknown and the uncertain beyond the imaginable. This show takes the human body as object/ subject and natural objects as substance/projected meanings. The body of work is devided in two parts: nature before the imprinting of human marks and construction of language and after. With various co-operants whose identities are multiplied in networks, Minerals presents various live performances among natural objects. The performers re-establish new relationships as they constantly act together with each other, with all the other objects and the audience. The show is a performative and collective endeavor.

2. The Psychic Life of Minerals/ Written by Denise Carvalho

FRAGMENTS FROM PUBLICATION WE WILL TALK ABOUT MINERALS

and holding the potential to eventually

The inherent necessity of containment

followed by the destruction of the form + the transmultation of content

The operating force to produce

the creative practice of thinking,

If form and structure are not taken in consideration, the result is the higher dispersion of information and knowledge, as information is associated to order.

before the making of a meaning. before language and

This cave allows us to understand how humans were aware of their surroundings: the landscape and the wildlife. Take as an example the piece of charcoal a Paleolithic man used to trace his drawings of horses and goats. If you look at these paintings closely, you may see the charcoal used in the contour of the animals in an empty wall, the grindings of ochre and other earth pigments they use to fill the images. The process and artistic tools then did not differ from the surfaces. The charcoal merges with its support (the wall) as if trying to freeze in place and time (record) the landscape and the wildlife.  (about Altamira Cave, in Spain)

His voice saying: The body is simultaneously a site, a medium, and a vanishing point. A word is a hole. The closer you look the more it recedes. The meaning of the word, at any rate, erodes.

That poem he took from his backpack saying among many unspeakable things: The desire for the reinvention of a new language beyond that one learned in childhood. A language that has the vibrant colors of his hometown, which has the taste of curry eaten by hands in aluminum canister. He had also dug his own fingers into the pot as a child, among those people whose skins were darker than his. He did it as if he were one of them yet he was more like a meteor falling randomly in that country.

If we ask ourselves, beyond this irresolvable contradiction, what is like to see things from the position of the meteorite? A meteorite is, by definition, arrested motion through space. It is what remains of a collision. What kind of cosmic dust links Argentina and Kassel in this collision of absence, or absent collision?

they cannot be seen.

Yet foretold they may be

from things present which are already and are seen.

Extract from Men in the Off Hours, by Anne Carson. Page 54.

When all things evaporate, we will talk about minerals

The expression of subjectivity turns into something collective. It negotiates. It co-operates.

Even in the off hours, men know marks.

The theater of cruelty is not a representation. It is life itself, in the extent to which life is unrepresentable.

I wanted to ask whether he thought that finding an eyelash under the pillow is an example of contingency such as the event of encountering a wishing bone of a prehistoric bird somewhere in Korea. The wish is the contingency, he told me, the rare thought found and remained inside of pocket cells of a time when objects existed without thinking.

[Do people believe in chance in Korea?]  My friend told me that they still believe in painting these prehistoric fossils.

"Anything else is hard to know.”

My friend and I sat, quietly gazing at the passing clouds dropping upon the highest mountain of Dajinsha, in Shanghai, leaving the screen and settling above us as if dust from a meteor mobilized our eyes.

I told him that I did not want the real thing. I wanted to live there, at that room at PS1, in that sterile room where clouds move in a loop. It was at this place of the dynamic structure of a state- space where I felt nomadic, fluctuating between reality and fiction.

My friend told me that I now must remember that this is a process of re-beginning, like those fossils of prehistoric birds being painted. We will not be afraid of the contingency of language and crumbling matter.

I asked my friend how far is the very Far East from home. I felt my heart dropping somewhere in the middle of both places.

"We are taking a flight, moving within the space we are creating.

Can you feel it?”

Eight women step on clay. They entropically bring the material to its complete formless state. They are breathing sculptures, a bodily installation where psychology unfolds right at their bones, fleshes and muscles.

The choreography embodies their return to the home of the self and their own private memories in order to step into the community where they learn how to negotiate and collaborate under mutual care.

GlassHours is an installation in a black room where sugar pours slowly through a transparent table top indicating the fragility of memory that can only be freed by imagination while Terra Firma was shown in a large screen tilted against a wall. 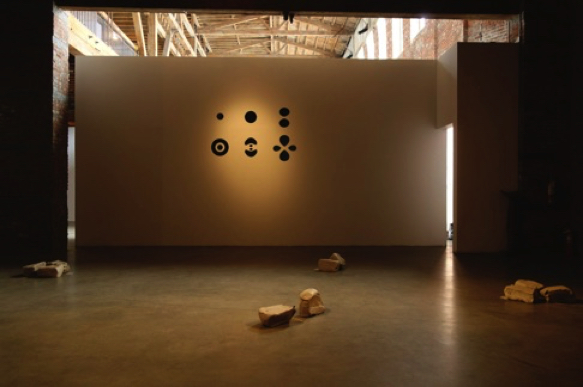 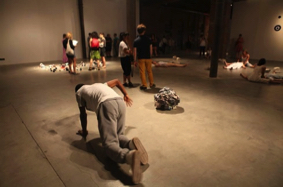 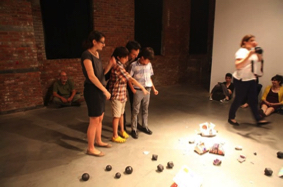 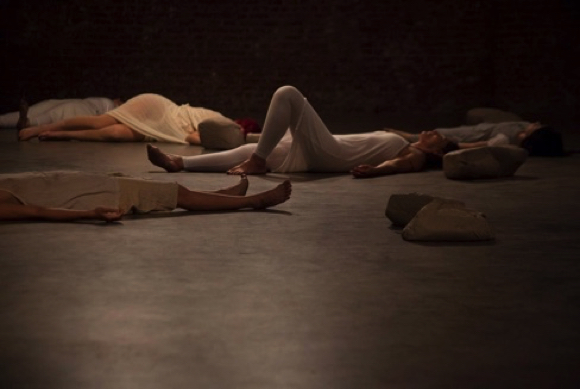 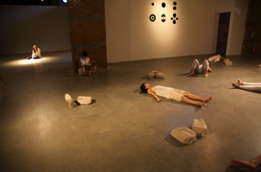 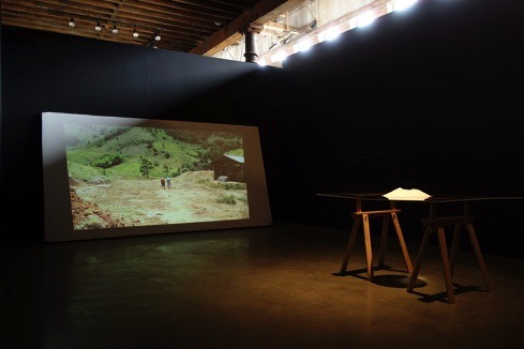